To close the year, last month we held our bimonthly reunion which included a mini class on how to perform at a job interview. Teresa Diaz, our invited guest, gave our students 10 steps for a successful interview. This mini class was followed by Christmas dinner as well as gifts for all our students and visiting friends.

0
Last month we shared the first part of our exploration to visit one of our student’s villages. Our two car caravan included Drew, CdK associate Pam, her family and a guest who came from Connecticut, USA.
The student is Eraclio, a young man in our program studying mechanical engineering. He comes from a mountain village of 15 houses and 97 people, that has no roads and no cars. So, there is no auto access! We considered this trip invaluable to help us understand the challenges that our students from remote villages face, such as limited access to education, modern culture, and job opportunities. But we couldn’t have imagined what we would discover.
We drove over mountains that were 9,500 feet in elevation, entered the jungle zone, then descended a steep rocky mountain for 30 minutes. At the bottom we parked along a wild river and loaded up our backpacks to cross the suspension foot bridge. Hiking through the misty jungle’s steep path was like walking into another world! Eraclio explained to us that everything the town needs from the outside world must be brought up that same trail–on their backs.
We hiked passed ancient ruins of the ancestors, and marveled at the view of the town perched on the mountainside. The path was soon lined by fruit trees leading to a magnificent waterfall. Eraclio’s family welcomed us warmly and helped us get settled. School kids gathered around to stare at us fair skinned foreigners that seemed to appear from some distant planet. They laughed as Drew made funny faces and tried to converse in Spanish, just to learn that their first language is a native dialect, and Spanish is their second language. This brief encounter made it clear that when students venture to the outside world, they are faced with many cultural differences.
We enjoyed several walking tours appreciating that the houses were connected by pathways. While some people had homes constructed from their homemade concrete blocks, others had simple wooden structures typical of tropical regions. Some residents had hot houses for growing plants and vegetables, and one man had a small trout fishery. We learned that most cannot earn cash there, as there are few jobs and businesses. Most families live off the land and use a bartering system instead of money.
We also enjoyed two nights of Posadas, a December tradition in recalling the Biblical account of Mary and Joseph searching for a room at the inn. Town’s people gather at night, carrying candles and singing going to a home asking if there’s room. They’re invited in for hot chocolate and bread. Young people miss this tradition when they move to distant cities.
While solar panels provide just enough electricity for the basics, new internet access is causing new societal issues to surface, that have never come up before. While some young people say they never want to leave, they will be faced with the same issues their parents deal with such as lack of cash for supplies such as rice, beans, meats, and other household needs.
In closing; Access to the outside world is shifting their expectations and causing a new dilemma. If they want a more comfortable life and be able to support their elders, they have to leave the village they love.
0

On December 1st, Worlds AID Day, CdK staff as well as students supported and participated in a 5K/10K run, benefiting a local HIV awareness campaign for college students. This big event was organized by one of our medical students (Jose Alberto) and hosted by a state of Oaxaca University (URSE). Also, one of our forensic science students, Berenice, WON second place in the 5K run. Thanks to many people our students are becoming leaders and understand about helping their communities. 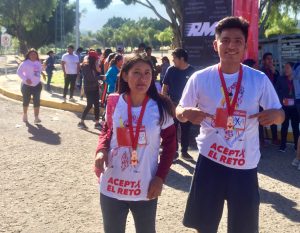 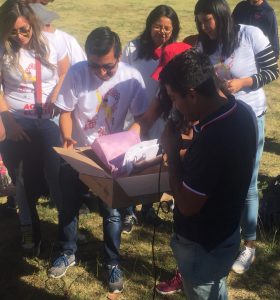 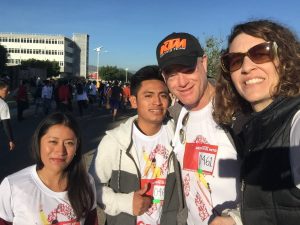 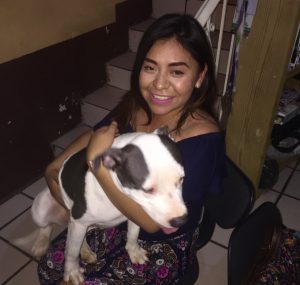 Montserrat Cruz is now in her final year of Veterinarian at the Benito Juárez Autonomous University of Oaxaca (UABJO), a public/state university in the city of Oaxaca. She is only the second person in her family to receive a higher education. Since she was little her dream was always to “be able to help care for all animals that surrounded her”.
During her busy schedule of classes, Montse interns at a local veterinary to support her studies. Huellitas Home is located in a marginated neighborhood behind the university she attends, in Colonia Cinco Senores. She got her job 1 year ago as school expenses where on the rise and family support was not possible. Here, she helps care for street dogs. Casa de Kids assists her with needed financial assistance so that she can keep up her internship and good grades.
When Drew interviewed her at the vet clinic, she said she wanted to work with animals, because “they reflect back to us what we feel, while sharing compassion and love when we need it; regardless of what we are going through, it seems as though they understand it.” Montse is always smiling specially when talking about her career. She always wanted to pursue higher education and now feels her dream is within reach! She will graduate in September 2020 and hopes to continue helping street dogs and all animals in general. Her hope is to be able to open her own vet clinic here in Oaxaca and help her family.
0
This summer Casa de Kids hosted many visiting friends from around the globe. Chairperson Loren is great at inviting friends and spoiling them in the best restaurants, while Drew tours them around to local historical sites and architectural treasures. This scenic and sunny Oaxaca is home to CdK’s 22 students.
One of our special guests was Irish born, Estelle Shanley. She is a world renowned journalist, and presented to our group a special class on Etiquette & Business Protocol. Our students loved it and finished out the evening with a pizza buffet! 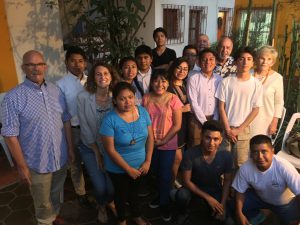 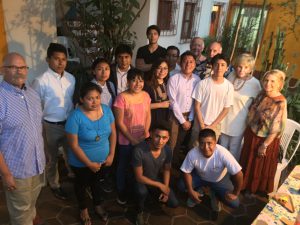 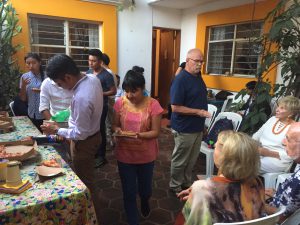 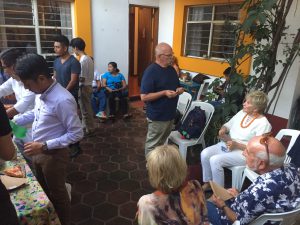 One of our other recent college graduates is Leticia Lopez. A native of Oaxaca, she was able to realize her dream of a college education with the help of Casa de Kids. We attended her family festivities honoring her accomplishment, complete with friends, native foods and kids playing in the rain. Leticia earned her degree in Education from Centro de Bachillerato Tecnologico Industrial y de Servicios (CBTIS), Oaxaca. Congratulations Leticia! 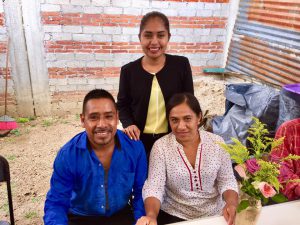 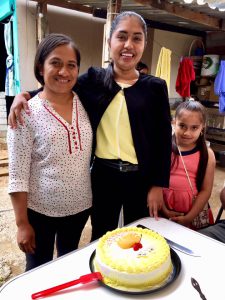 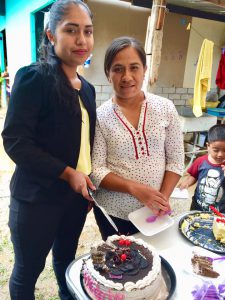 1
Pablo Aragon was born and raised in Tuxtepec, a village from Oaxaca´s Papaloapan region. 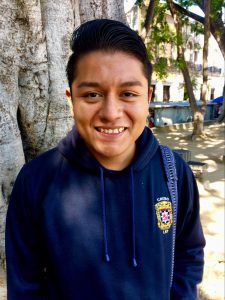 He is the first in his family to graduate from college. In August of this year Casa de Kids attended his graduation where he received a degree in Education. Only a few weeks later he scored his first teaching job at a local elementary school, Escuela Primaria Moises Saenz. The school is located in Tlalixtac de Cabrera, a municipality 20 minutes away from Oaxaca. Pablo is now in charge of a 4th grade class of kids ages 9-11. He’s on a path to independence!
1

At Casa de Kids we envision a world where orphaned children experience the safety of a loving home while receiving a quality education.

We are pleased to introduce you to one of the 5 students that our Giving Tuesday campaign is assisting. Our newest student is Sochi, who is 16 years-old. In her native language, her name is spelled “Xochitl” and pronounced “Sochitl”, but her nickname is Sochi. She is a vibrant and optimist girl living on her own, loves basketball and has almost a perfect Grade Point Average for several years. She is also becoming fluent in English, now her third language!

Sochi attends high school near Oaxaca city, living in a small rented room, because her little country town of 200 people has no high school.  She says, “My goal is to be a responsible person and work for a company so I can help provide for my family’s basic needs”.

CdK, with help from donors like you, is paying for her nominal rent and basic school supplies. We know that with her superior intelligence, stellar  GPA and endless determination, she can do anything! Please join us in helping Sochi with a tax deductible donation today.

$100. USD will pay for school supplies for one year.

Consider forwarding this to a friend! 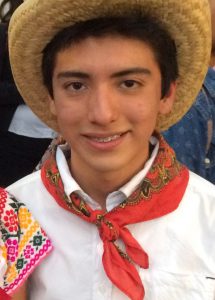 We ended 2017 by accepting three new female college students into our program, 2 new high school students, and hosted a Christmas luncheon for 15 people. All of the students in attendance received motivational books as gifts. Younger kids in the orphanage were given new shower sandals and gift bags of holiday candies. Each month we donate cheese and egg products to them to supplement their diet.

One of our star high school students, Jesus, received an essential computer for school, thanks to everyone who responded generously on GoFundeMe. He is shown here in a photo taken last week in his school music and dance performance in our city centre. We have two college students graduating in June of this year, and another would-be-law student to join us soon! Thank you everyone for helping us break cycles of poverty through education. Education is the key; You and I are making this a reality. In gratitude, –Drew L. Vogt, CdK co-founder & President

We at Casa de Kids would like to thank the many recent individual donors for their generous donations, most of whom prefer to remain private. You have enabled us to send a new female student to a local university, whose dream it is to become a teacher, and for us to send two new young men to attend local high schools.

We also wish to thank the members and friends of the following communities for their generous support to our non-religious work: Celebrate Life Spiritualist Community (San Francisco, CA), Fraternal Spiritualist Church (San Diego, CA), and Sarasota Center of Light (Sarasota, FL). Their donations have made it possible for us to fund over 20 students’ remedial classes preparing them to enter local colleges and universities; without which they would not quality.

Thank you for your love and belief in our world’s children! We know that even one educated child can help change the world. Thanks to you we are now sponsoring three full time college students, and two high school level students. We continue to support the residents of Casa Hogar orphanage as needed, for example supplementary foods, school uniforms and supplies, and hygiene items. In last twelve months Casa de Kids has hosted over 20 social events with these worthy kids. These were fun and educational events outside the orphanage, such as birthday parties,  graduation celebrations, museum outings, and recreational trips to local parks.

If you are inspired to donate to these amazing students’ ongoing expenses, your tax-deductible donation can be made securely on our website here, or you can mail checks to CdK to: 1717 E. Vista Chino #A7-410 Palm Springs, California 92262

Dedicated to various concepts of time, what is soon to one person, may be never for some one else. ... See MoreSee Less